James I was on the throne and had a great hatred of witchcraft, he had published a book on Demonology and vowed to stamp out witchcraft.

Superstition was rife, and local Magistrates, Judges and Estate Owners, tried to gain favour with the King by holding Witch trials through out the country.

The story of the Pendle Witches took place in the Forest of Pendle on the Kings Royal Hunting Ground. Sometime in March of 1612, Chattox broke into the hot house of Demdykes home at Malkin Tower, and items to the value of £20 were stolen. Chattox was seen wearing an item of clothing stolen from Malkin Tower by Demdykes Grand Daughter Alizon Device. The theft was reported and in March , an enquiry in to the theft was held at Read hall by Roger Nowell the local Magistrate. Chattox was questioned and seeking revenge made accusations that Demdyke along with others were witches. A week later Alizon whilst begging near to Trawden field came across a Pedlar called John Law from Halifax, begging him for some pins and receiving nothing but abuse from him she allegedly cursed him. Law immediately fell to the ground complaining of being paralyzed down one side (today it would have been called a stroke) and was taken to a local inn by passers by.

In late March Alizon was questioned by Nowell and confessed to bewitching the pedlar. The two old women in their 80's Demdyke and Chattox along with Anne Redfern and Alizon were then taken by foot to Lancaster Gaol. On Good Friday 6th April 1612, a meeting took place at Malkin Tower. Nowell the magistrate believed it to be a witch's coven, and ordered the arrest of all those present. James Device was asked to give evidence, along with his sister Jenet, who was only nine years old. They confirmed Nowells suspicions that there had been a witches coven, meeting at Malkin Tower.

In 2011 local school children visited and helped with an archaeological excavation to look for artifacts dating back to the time of the Pendle witches.

On 19th August 1612 The following were found guilty of being witch's and were hung at a public hanging in Lancaster: 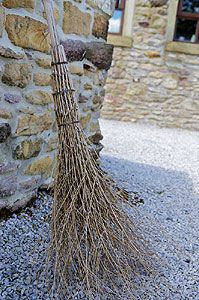 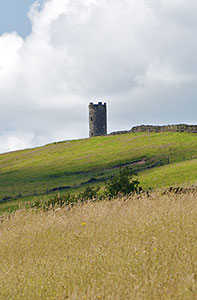